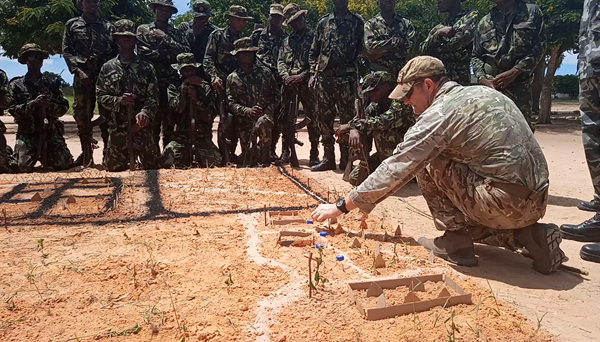 Africa’s quest for lasting and sustainable prosperity was dealt a massive blow by the Covid crisis of 2020. The African Development Bank estimates that the continent’s economy contracted by 2.1 percent last year, a sharp contrast from 3 percent growth envisioned pre-Covid, and that roughly 30 million Africans were thrown into extreme poverty. The Bank projects a strong rebound in 2021 to 3.4 percent growth, but still reckons an additional 40 million Africans could fall into poverty, a reflection of the uneven nature of the recovery as well as rapid population growth (18 African countries rank in the global top 20 for fertility rates). Persistent economic misgovernance, corruption, and a rapidly growing debt burden pose additional long-term challenges to growth and development.

However, one factor that often receives short shrift as an impediment to growth and development is the continent’s drastically worsening security environment. In sharp contrast to the 2000s, when the continent’s security environment showed notable improvement, since 2010 Africa has seen the rise of a host of complex insurgencies that show no sign of concluding anytime soon. These wars have cost tens of thousands of lives and displaced millions. Notable conflicts include:

Sadly, the above represent just a snapshot of the continent’s most high-profile conflagrations:  a worsening insurgency in northern Mozambique and a secessionist conflict in Cameroon are two other notable causes for alarm, and while Libya, Sudan, and South Sudan have all made notable progress toward resolving conflicts in recent months, peace will likely remain fragile in all three countries for the foreseeable future.

These conflicts not only are taking an immense human toll (including combat casualties, lives lost due to disrupted services, and lasting physical injuries and mental stress), but also have a massive economic impact. In Africa, this can be difficult to quantify, particularly reputational cost: investors tend to avoid instability, so the presence or even perception of conflict is certain to keep them away. However, a range of academic studies suggest that conflict can diminish GDP growth by 2-3 percent on average. Ethiopia presents a rare measurable example, with the IMF estimating earlier this year that Ethiopia -- which saw growth of roughly 9 percent throughout the 2010s -- would have no growth in 2021. Not all of this is due to conflict, as the lingering effects of Covid also have an impact, but given Tigray’s heretofore booming economy it certainly plays a key role.

African conflicts also have a significant and measurable cost for both regional governments and the international community. Nearly 90 percent of roughly $7 billion that will be spent on UN peacekeeping missions in 2021 will be spent in Africa. Meanwhile, interventions by the African Union in Somalia; France in the Sahel; the US across the continent but particularly east Africa; and a host of other actors will add billions more to the tally. Yet despite this enormous cost, it is debatable whether these interventions are having any notable positive impact. In places like Congo, CAR, and Mali, UN peacekeepers have no ‘peace’ to actually keep, putting them in harm’s way as they tend to be distrusted by all sides. French intervention in the Sahel has resulted in tactical victories against insurgent targets but has also resulted in a boom in anti-French sentiment. Meanwhile, al-Shabaab has played up the presence of regional troops -- notably from historical antagonist Ethiopia -- in Somalia as a mark of the Mogadishu government’s illegitimacy.

Ultimately, the spread of African insecurity and the deepening of its intensity make it clear that existing approaches to stopping them are simply not working, despite the immense cost. The definition of madness is doing the same thing over and over and expecting a different result: a new, perhaps radical, approach to African security is needed if the continent is ever to reach its full potential. And this approach must focus heavily on ensuring that African militaries have the ability to counter insurgent threats on their soil without outside assistance.

Africa’s security forces have seen a steady and in some cases precipitous decline in funding since the end of the Cold War and the withdrawal of large-scale patronage from the US and Soviet Union. While declining budgets are only part of the story -- corruption has also played an unquestionable role -- the past decade has shown with increasing clarity how little capability most African militaries have to combat insurgencies. Improving African militaries is a relatively low-cost, high-impact proposition, which can be done through a combination of training and longer-term in-country mentoring; provision of theatre-appropriate equipment; and possibly supplementary budgetary support for salaries. As an example, UN troop contributing countries are reimbursed $1,428 per month per peacekeeper; meanwhile, few African army privates make more than $100 per month. Building local capacity thus offers far more ‘bang for the buck’ and can bring promising results. Professionalising militaries also offers an opportunity to emphasise respect for human rights and dignity, something with which many African forces have struggled in conflict.

There is also the increasingly pertinent question of legitimacy. As noted earlier, former colonial power France has come under growing criticism on the continent for what many Africans view as a selective approach to peace enforcement that is devoted to entrenching French interests rather than those of the countries in which it operates. The longer the French presence remains, the more insurgent groups will be able to use it as ammunition to undermine the legitimacy of those governments. Somalia represents a similar story, as do Nigeria and Mozambique, where governments have resorted to the use of mercenaries in those conflicts. Ultimately, only local actors have the legitimacy to deal effectively and sustainably with insurgent threats; outside actors represent a stopgap measure, nothing more. Thus empowering African forces is an absolute long-term necessity.

This approach will not be fast or easy. Longstanding US efforts to build Somali military capacity have yielded few successes, for example. It also will not be appropriate in every situation; international efforts to bolster the Ethiopian military in the midst of a civil war would be highly irresponsible at this point. However, broadly speaking, local capacity building still represents the only viable way forward for lasting security, not to mention an excellent value proposition. In the long term, continued or worsening African insecurity will have a significant economic impact on the world as a whole; smart interventions now can go a long way toward mitigating that impact.