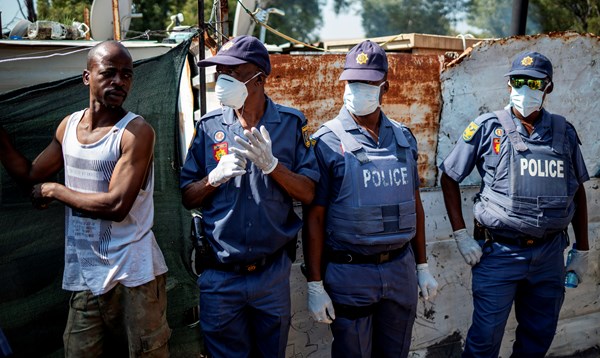 The past few weeks have displayed the incredible resiliency and effectiveness of armed forces around the world in dealing with the outbreak of Covid-19. Military forces around the world have been diverted from their traditional roles to patrol city streets to enforce curfews and quarantines; rapidly set up testing stations and field hospitals; use their assets to transport materials both nationally and internationally; and take on a raft of other tasks traditionally handled by civilian authorities.

Broadly speaking, the performance of militaries across Europe, China, and the United States – thus far the most affected areas in regard to infection rates – has been exemplary. However, these are some of the best capacitated and trained militaries on the planet, with the financial and human resources to maintain stockpiles of medical equipment, develop specialised combat medical capabilities, and conduct crisis simulation exercises. What is less clear, however, is how security forces in poorly resourced countries – notably in Africa, where Covid-19 is just now gaining a foothold – will respond, both tactically and strategically.

From a tactical standpoint, questions mostly relate to the capabilities of security forces – including militaries but also police services and gendarmeries – in regard to the various tasks they will be asked to carry out. For example, are there enough trained medical professionals to effectively assist in a crisis? Do enlisted troops who are not medical specialists have training in how to take a nasal swab, take blood, or operate a laser temperature gun? Do they know how to use personal protective equipment? Can they effectively set up screening centres and, if necessary, quarantine areas at border posts and airports? And if they are asked to enforce quarantine – particularly in cities where populaces will resist such efforts or have deep-rooted mistrust of security forces – do they have sufficient public order training to do so in a humane and effective way? Already we are seeing reports of Indian police using rattan canes to beat curfew violators and force them out of the streets.

Perhaps more important are the larger strategic considerations that underpin the tactical questions. As an example, early last month – before the Covid-19 crisis accelerated – I disembarked at a major African international airport. I was impressed when members of the military got on board to take everyone’s temperature before disembarkation. However, it was less clear as to whether there was any sort of protocol had a passenger had an elevated temperature. Was the plan to isolate the passenger? The entire plane, which had been breathing recirculated air for several hours? Whatever the case, these are the sorts of questions that security force planners will need to think through, both internally and in conjunction with civilian leadership.

It is obviously premature to critique the performance of security forces in Africa and other less wealthy countries that have not yet borne the brunt of Covid-19. But it is safe to say that military capabilities shortcomings in several of them will mute the effectiveness of their responses when the time comes, forcing them to rely on external assistance. We have seen this before, most recently during the 2014-15 outbreak of Ebola in west Africa, where US, British, and French military support were vital to containing the outbreak.

Thus, there must be a strategic consideration across the donor community of how to better prepare African and other less capacitated militaries with the tools and training that they will need to identify and mitigate the next pandemic. From an equipment standpoint, ensuring the availability of basic medical supplies, personal protective equipment, and mobile treatment and testing facilities are a low-cost, high-impact way to ensure at least a rudimentary reaction capability exists. But more importantly, security forces should be trained broadly and thoroughly on pandemic response, both operationally and strategically. Like the equipment, such training and mentoring is an insurance policy of sorts, with limited cost but a potentially immense payoff when the next pandemic arrives.

Importantly, this is about ‘when’ the next pandemic comes, not ‘if’. Covid-19 is ultimately not that lethal, but comes from a family of viruses susceptible to mutation; the next one could be far more deadly. While hemorrhagic fevers like Ebola tend to kill too rapidly to turn into pandemics, they still pose a mass casualty risk that cannot be ignored. Ultimately, we cannot predict what the next pandemic threat will look like, but we can take steps today to ensure that global security forces will play an effective role in dealing with it.