Natural disasters, the rise of terror, and how the military can help 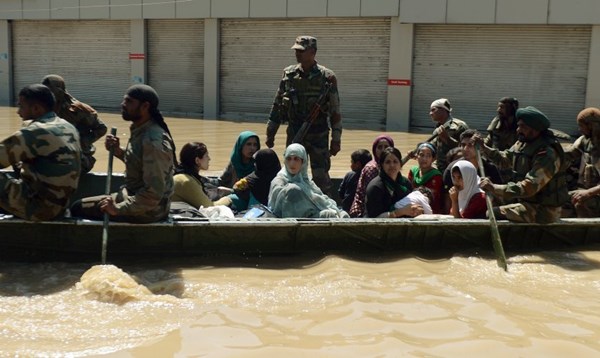 To respond to such an environment, security forces will need more frequent and targeted training to respond to such disasters. Such training in disaster preparedness and response will ensure timely mobilisation and a targeted reaction when catastrophes strike.

Multiple studies have interrogated the link between natural disasters and the rise of national security threats, and all have concluded that the occurrence of the former sees a definitive rise in the latter. In particular, the 2015 EU-funded project NDTERROR (‘Can natural disasters incite terror?’) concluded that disasters have a strong positive correlation with subsequent domestic and transnational terrorist events and related deaths. This study and others suggest that the risk of transnational terrorism increases immediately following a disaster, due to the desire to exploit weakened ‘hard’ targets amidst the prevailing disorder.

Although it takes longer to materialise, widespread popular unrest is another threat to stability when the public perceives government response to the crisis to be inadequate or too slow. Disasters expose states to greater scrutiny; the perceived failure to provide sufficient, equitable assistance and public services can lead to political discontent. The resulting tension can then lead to rapid mobilisation of collective action by non-state groups that view the government as having an eroded legitimacy.

The danger of complacency: When government gaps are filled

Non-state groups – including terrorist organisations – have intervened in the past following natural disasters when government response is inadequate. These groups generally seek to help local populations and build loyalty among those who feel neglected by the government, then take advantage of discontent with the government’s insufficient response to sell their ideology or recruit. They also take advantage of volatility, either seizing control of resources for their own benefit and/or using them to the disadvantage of the local population.

The role of security forces in natural disaster response

In the past ten years alone, nearly 4,000 natural disasters have affected two billion people around the world. In the case of nearly every major disaster, national – and occasionally regional and international – military components have been deployed to take on such tasks as building camps for displaced people, conducting evacuations, finding survivors, restoring infrastructure, and providing a range of other activities that fall outside the traditional military purview of fighting wars in territorial defence.

The role militaries play in disaster relief shows no signs of dissipating soon. Disasters are often at a scale so large that states lack the bandwidth to provide and manage the immediate response using only their civilian capacity. Even though the Oslo Guidelines – a set of international norms, originally laid out in 1994 – explicitly call for the use of foreign military assets only as a ‘last resort’ in disaster assistance, these have largely been ignored in recent years, with the scale of disasters overwhelming civilian ability to respond to them. To quote New Zealand’s former defence minister, Wayne Mapp, ‘International experience has shown that major disasters almost immediately overwhelm local emergency services. Humanitarian relief is increasingly a core task for all defence forces.’ Particularly in the early days after a disaster, there is a great need for the precision, resources, training, and reach of the armed forces. Lastly, due to such factors as climate change - as identified in our Strategic Outlook this year - and demographic growth in disaster-prone areas, there is almost certainly going to be growing demand to develop capacity in those countries, particularly in Africa, the Middle East, and South Asia.

However, our research has found that military training for disaster relief is generally inadequate, especially in the developing world, wherein domestic militaries remain largely unprepared and dependent on foreign military assistance, particularly from the USA. Most forces go through infrequent exercises, with a lack of focus on building self-sufficiency, conducting regular field training exercises, updating on best practices for coordinating with civilian and humanitarian actors, or even provision of refresher courses.

Thus, the training of national defence forces in disaster response needs to be institutionalised, more frequent (as opposed to the token annual exercises that most countries seem to go through), geared toward ensuring self-sufficiency, and involving an acknowledgement of how climate change is going to exponentially increase the incidence of natural disasters in the coming decades.