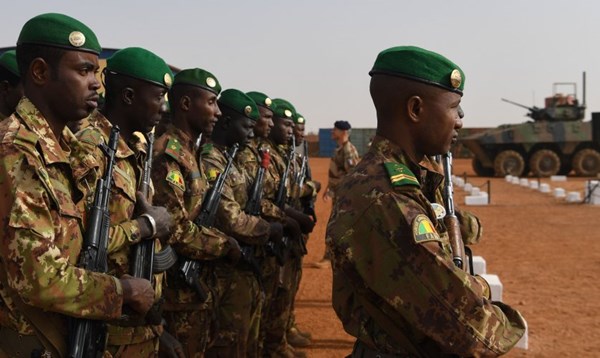 With the highest proportion of people living with HIV/AIDS globally, Africa has long struggled to stop the rapid spread of the virus. However, new key populations, who are at significant risk of carrying and spreading the virus, are emerging, which can ultimately affect the security situation across the continent.

The spread throughout recent years suggests that African armies in particular are becoming one of these populations, with HIV rates that are two to five times higher than those of the general population. Furthermore, estimates show that up to 75 percent of soldiers in a range of East African countries die from AIDS within one year of discharge. While data on the topic is sparse, the transmission rate of HIV/AIDS has become a security threat to militaries and civilians alike - a threat for which there is no simple solution.

Why armies are becoming a key population

The reasons for the spread of the virus to and within militaries can be attributed to a range of physical, structural, and socio-economic factors. Due to the interaction between these, the spread can be difficult to contain. An obvious cause is the low incidence of barrier method contraception usage. One study shows that while 97 percent of soldiers in the Angolan Armed Forces knew about the effect of condoms in terms of preventing sexually transmitted diseases, only 57 percent actually use them. This is combined with the fact that soldiers are often below the age of 30, and statistically, 18 to 29-year-olds are the most sexually active. Another significant factor is the mobile employment of military personnel. Several studies suggest that the likelihood of seeing sex workers increases the more time one spends away from one’s family and network. The particular environment, in which the soldiers are, also plays a role, as they frequently face combat situations and are used to engaging in high-risk behaviour. This is particularly the case in Africa as the majority of soldiers are in combat roles due to limited funding. Therefore, in comparison, having unprotected intercourse may not seem like an action that can have potentially life-threatening consequences. Lastly, socio-economic factors play a role, as soldiers are often deployed to conflict-torn and poverty-stricken areas. Consequently, the status of the uniform can attract sex workers and locals, as soldiers become associated with money and power, thereby creating a mutually reinforcing pattern.

The solution needs to be pragmatic, yet social. It must be adapted to an army context in terms of understanding the particular drivers and situations in which soldiers are mostly at risk of contracting or spreading the virus. An innovative, multi-faceted solution focuses on various aspects behind the spread and encompasses five factors: testing, monitoring, education, counselling, and a database. Briefly explained, the annual testing will include all soldiers within the army in question and can be done from a finger prick test that determines one’s status within 20 minutes. If an individual tests positive, this will be confirmed via a secondary test to determine the viral load, after which the soldier will start on the anti-retroviral (ARV) treatment.

A large problem with programmes that have focused on testing is that they lack sustainability by not continuing to monitor each individual’s viral loads. Part of the solution is therefore to continuously check HIV positive soldiers’ viral loads, as the vast majority after six months of regular treatment should reach a stage where the virus levels are classified as ‘undetectable’ - meaning that the virus is suppressed. At this stage, the virus can effectively not be passed on - not even in the case of unprotected intercourse. However, some people experience viral blips meaning that viral loads can fluctuate, which makes continuous monitoring of the viral loads and drug adherence essential. A secure, electronic database is therefore crucial in order to ensure valid and confidential monitoring of each soldier’s health.

However, merely focusing on the practical aspects of treating HIV/AIDS-infected personnel is not likely to reduce the spread significantly. Integrating social solutions are therefore key. These include an educational programme as well as access to counselling. In order to have any effect, an educational programme needs to be interactive and cover areas that HIV/AIDS also affects indirectly. It is therefore not enough to teach soldiers about the stages and symptoms of the virus; issues such as gender imbalances and the stigma surrounding the virus must be addressed through discussions and case studies. Some individuals may have questions that they are not comfortable asking in public, which is why counselling needs to be part of any programme. These strategies can lead to a reduction in the spread, as soldiers, whether HIV positive or negative, will be able to make informed choices and are less likely to spread the virus to their local communities, or those with which they engage during deployment. Importantly, incorporating social strategies also serve to reduce the stigma which, more than scaring people off from contracting the disease, only scares people off from getting tested. For that reason, the stigma should be addressed in all ways possible.